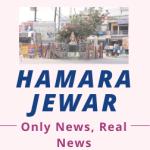 Varun Bhati, a high jump Paralympic player from Jamalpur, has left for Tokyo on Thursday evening. Before his farewell, Varun’s grandmother Sumitra sweetened his grandson by blessing him with victory. After this sweet farewell varun said that he will definetly bring the medal for his grandmother as well as India.

Player Varun Bhati told that because of the second wave of Corona, he remained out of the field for a long time, but maintained fitness by putting gym equipment at house. because of this, he has been selected for the Tokyo Paralympics. He had brought laurels to the country last time by winning a medal at the Rio Paralympics. After this, he has performed well in other sports including Asian Games. He has expressed confidence that this point he will target the medal in Tokyo. aside from these, ‘We will arrange other resources including coaches by repairing the grounds’

Bisrakh block chief Apreet Kaur said that six committees are constituted in Bisrakh block to enhance the level of education, supply pure water and do development work in the villages. Arrangement of other resources including coaches are going to be made by repairing the playgrounds within the villages, in order that the players are often prepared to participate within the competitions at the international level. Apreet Kaur was speaking at a gathering held within the auditorium of Bisrakh block on Thursday. He said that six coordination committees are constituted for this. Each committee consists of Kshetra Panchayat members.

He said that so as to stay in mind how the event reaches the last person of all the villages of the block, six committees are formed, which include Planning and Development Committee, Education Committee, Construction Works Committee, Health and Welfare Committee, Administrative Committee and Water Management Committee. is included. Each committee will have a head, six members, all members of the regional panchayat of the village. At an equivalent time, playgrounds are going to be developed within the villages to reinforce the sports talent of the youth at the village level.

In the first phase, stadiums located at Dujana and Aakilpur are going to be developed. they’re going to be given the resources needed by the players. In this, work are going to be done under the guidance of District Magistrate Gautam Budh Nagar. At an equivalent time, there was a discussion on the space of the block being quite the villages of the world . Demand arose to bring the block on GT Road. On this occasion Block Development Officer Neha Singh, Block Chief Representative Shomendra Nagar and Block Staff were present.